The Employment Services Team tried something new on Friday July 12, 2019. “The idea was actually not a new one, because Harry, one of our independently employed individuals, has been suggesting that we do this for some time,” says Shawn Quinonez-Castillo, Employment Services Program Supervisor.

In front of a packed room of about 70 individuals served and a dozen or so staff beside them, Harry spoke openly about his job. Harry has been working at Stevenson University for the last 14 years. He talked candidly about the challenges of working independently, but left the group feeling hopeful by explaining to them that he has an Employment Services support team at the ready to assist him when troubles arise.

Harry told the group that they should not be afraid to get their own jobs. He let them know that he used to work in the workshop too, and that following directions, having a good attitude, and being open to learning how to do new things have helped him to be successful on his job. He shared that he received an award for being such a hard worker and that his co-workers and boss are helpful to him as well.

Harry told the group that he has his own apartment and uses the money he earns to take care of his needs and to buy many things he likes, which resulted in a thunderous applause from the group.

Shawn shares, “The best part of the presentation was when the floor was opened up to questions from the audience; we could see that Harry’s message had reached some of them.” 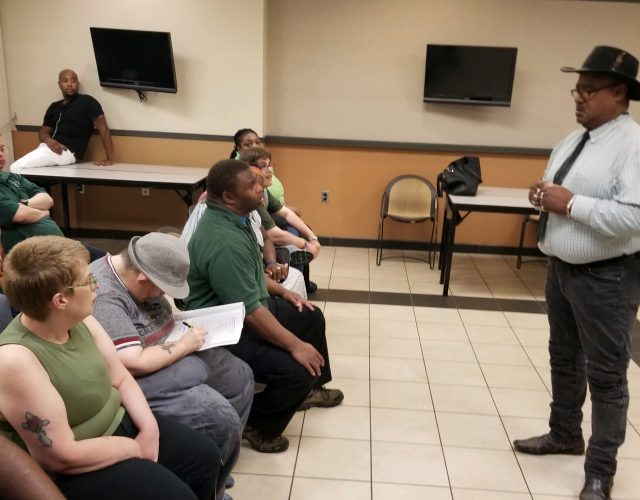 Becky asked Harry how he was able to deal with changes in the workplace, sharing that she had been employed previously. She said the supervisor who trained her left and the new supervisor wanted things done in a different way. She bravely revealed to the group that she had been fired because she found it hard to adapt to the changes under the new supervisor. Harry comforted Becky and told her that changes are a part of work. He said, “You can do it. Work hard. You do it. Nobody else is going to do it for you. There is always gonna be changes, but it is ok.”

Wayne, then raised his hand and asked, “What if I need help?” Harry reassuringly told him, “You can ask your supervisor for help, or you can call your job coach.”

In the rear of the room, Christine raised her hand, stood up and said, “At first, I did not like my job coach because she used to tell me what to do or not to do, but then I realized that she was just trying to help me. I don’t feel like I used to anymore.” Everyone clapped for Christine!

A shout went out to Sherrell, who was sitting in the audience. Sherrell had gone on a job interview just the day before with one of the employment specialists and was hired.

Shawn reflects, “There were many other expressions shared. These were just a few that were so very touching. The energy in the room was so positively charged by the end of Harry’s presentation, I really got the feeling that there had been a shift in the thinking of many of the individuals who attended.”